3 Awesome Benefits of Minimalism (Plus, One Bonus Benefit)

The benefits of minimalism are many. This post highlights three of them, but there are way more than that.

No, really, there are way, way more than three.

Give the lifestyle a try and before you know it you’ll be doing handstands outside.

Hopefully your dog won’t be so deadpan.

Seriously though, embracing minimalism has the potential to change your life for the better in ways you can’t begin to imagine.

And not just because it’ll save you money. Although, that in itself is reason enough to hop off the stuff train and start dealing with the clutter that’s piled up around the house.

Mention the term ‘minimalist’ and people immediately imagine a monk-like existence devoid of all creature comforts. But that’s not an accurate depiction of the lifestyle.

There’s no one-size-fits-all with this lifestyle.

There are extreme minimalists who’ve taken the less is more approach more literally than most. Where shopaholics happily splurge on unnecessary things, these guys have made a hobby of purging their possessions.

There are also minimalist families living regular lives with less stuff. Their house is still a home, it just has more space. They have everything they need to feel comfy.

Joshua Becker —author of The Minimalist Home— sums up the minimalist lifestyle perfectly, “Minimalism is the intentional promotion of the things we most value and the removal of anything that distracts us from it.”

We may differ on what we own, but minimalists all agree that experiences are worth more than things.

Once you get that happiness does not —as the marketing moguls would have us believe— reside in the things you own, your spending habits change. Having for having’s sake will seem pointless.

There’s a sense of freedom that comes with that. Items you once coveted lose their appeal. Instead, you turn your focus to the things that matter, like shared experiences with family and friends.

The Amazing Benefits of Minimalism

Okay, so what exactly are the benefits of minimalism and how does one get started on this journey? Let’s start with the advantages and then we’ll move on to the how-to part.

“No thanks, I don’t want more time,” said nobody ever. The majority of us live for Friday and dread Monday. We have a million things we’d love to do, but we never seem to get to any of them.

Along with the job we have to show up for, we also have to clean the house, do the laundry, mow the lawn, fill the car (or cars) with gas, pay the bills, the list goes on.

And that’s just the everyday of it.

Stuff is needy and time-consuming and the more we own, the more of our time it takes up. It makes sense (kind of) when you’re actually using something, but what’s the point of spending valuable time on things that are languishing in the garage?

Sporty and I noticed an instant increase in leisure time after shedding the majority of our belongings. We didn’t set out to become minimalists. We happened on the lifestyle quite by accident.

On the verge of moving house —and breaking out in hives at the thought— I proposed a rather out there idea to Sporty.

“If we lived in a furnished apartment,” I reasoned, “we wouldn’t need to lug all this stuff around with us.”

It took almost no persuading to reach an agreement. Although pointing out that it would bring packing down to a bare minimum certainly helped my cause.

We still have chores to do, but they’re done in a tenth of the time it used to take us, leaving us free to do the things we enjoy, like going to the movies, quaffing red wine and whatnot.

It might sound silly, but owning less literally freed up our calendar. We went from having no time to having all the time in the world.

Almost. I mean, we still have to work. 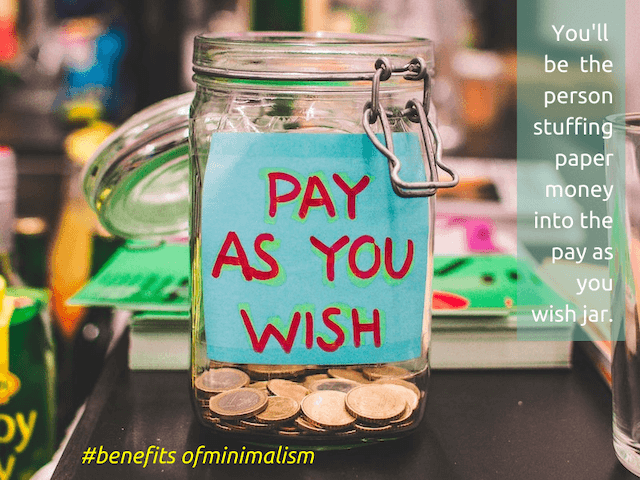 Make no mistake: stuff is expensive. There’s the initial outlay when you buy something new, but then there are the additional costs that we invariably forget to factor in when we’re in the midst of our buyer’s high. Which is why it’s so often followed by buyer’s remorse.

On a practical note, whatever it is we’ve just bought will most likely need to be insured, cleaned, maintained, serviced and repaired. Some items require gas or electricity to work, which pushes up the price even more.

The other reason stuff is expensive is because of our constant need to upgrade. Call it keeping up with the Jones’s, call it being stuck on the Hedonic Treadmill, it doesn’t matter. It’s costing us.

Once you break the habit of always having to have the newest whatever, you’ll find your expenses going down, or at least plateauing, as opposed to always rising.

Of all the benefits of minimalism, I’d say this one is still our favorite. It sounds a little shallow to be all about the money, but nothing beats being debt-free.

When you’re swimming in surplus leisure time and cash, stress quickly evaporates. Suddenly, you have options. You can quit the job you hate and take a chance on your side-hustle. You can consider taking up dance classes or painting or you can decide to ride the Cape Town Cycle Tour on a foldy.

One day you’ll wake up and realize that you’re not living weekend to weekend or paycheck to paycheck anymore. You’re just in the moment, enjoying life to the fullest. In short, the stuff you own no longer owns you.

It bears mentioning that stuff brings with it a host of other potential stresses, too. What if an intruder makes off with Grandma’s silverware or the cat knocks your Ming vase off the bookshelf?

You can’t avoid all of them. Well, not unless you move into a cave and live out your days in a loin cloth. Even then, there’s no guarantee some wily primate won’t wrestle it from you.

Besides, nobody wants to live in a cave anyway. Where would you get coffee? I shudder just thinking about that, so I’ll move swiftly back to my point.

Which is that some potential stresses are avoidable. Take owning a car, for example. Along with the freedom and convenience it brings, a car can just as easily turn into a massive headache.

Let’s say you’re driving to work and someone rear-ends you because they were busy texting.

Now your car is a mess, you have to call your insurance, get your car towed and you have to find a car accident lawyer because Mr. I’m too busy texting to look where I’m going is insisting the accident is your fault.

If you’d taken the bus to work you could have avoided all of that.

I get that not everyone is in a position to live without a car, but if you can get by without one it’s worth considering. Even if you can’t, take a long, hard look at the things you own and the potential stresses they hold.

If you don’t really need something, let it go. Happiness comes in buckets when you own less stuff.

What Does it Take to Become a Minimalist?

Minimalism looks different for everyone. But the benefits of minimalism are almost always the same: more money, more time, more freedom and less stress. It’s also been known to make you happier and increase your productivity.

Everyone has a different story and a different message to share. Start by finding a virtual mentor (maybe even a couple) whose message resonates with you. Along with searching for ‘minimalist blogs’ on Google, you could also try looking for minimalist TED talks for further inspiration.

The next step is to start the decluttering process. Again, there’s a ton of wisdom available online, so search for a process that speaks to you and dive in.

One popular approach is to play the mins game. Another is to declutter your home room by room. Taking an online course like Uncluttered is also an option.

How you do it is up to you, just make sure you end up with less than you started with. Stick with it and you’ll end up happier, richer and a lot less stressed. And you’ll have more freedom.

The Bonus Benefit You’ve Been Waiting For

The internal shifts that come with living a minimalist lifestyle can be tough to articulate without sounding woo-woo or hippie-dippie (sorry Loretta).

MJ Gordon refers to it as the psychology of minimalism. (Her thoughts on the subject are enlightening, be sure to check out the video.)

For Sporty and I, this bonus benefit is the one we value most. Sure, being less stressed and having more money is great, but it’s how we’ve changed internally that’s been most beneficial.

That’s not to say we don’t still have goals and aspirations. Of course we do. The difference is, we’re able to be happy in the moment while at the same time striving for better (or different).

Right now, that something else is moving out the city and buying a van so we can go on weekend adventures. However, if that doesn’t happen we’ll be okay with that.

In the past, not having a dream realised would likely have resulted in much wailing and gnashing of teeth. Now it’s more a case of, “Oh well, that didn’t work out. What else should we do?”

We still have challenges. But now we see them as an opportunity to play the equanimity game, We don’t always get it right, but we we succeed more than we fail.

Even when we do slip up, it doesn’t take long for us to remind ourselves to practise acceptance. In her book Loving What Is, Byron Katie highlights the futility of arguing with reality.

It’s Time to Move From Knowledge to Action

You know the benefits of minimalism and you have a good idea of how to approach the lifestyle, it’s time to put what you’ve learnt into action.

What one thing can you do today that will set you on the path to a less cluttered life? Starting is often the hardest part.

By choosing one thing, you’re less likely to feel overwhelmed. When you’ve done that one thing, find something else and so on.

Don’t think about the task as a whole, that’ll just send you to the couch with a family-sized bag of M&Ms.

Forget about the mess in the garage. Ignore the tip that is your closet. Never mind the clutter that’s taking over the rest of your house.

Focus on your one task. Maybe for today it’s your kitchen drawers or the Tupperware cupboard or whatever.

You can do this. If, at any point, you feel your motivation sliding, leave a comment and we’ll get you back on track.