Prior to leaving the Big Smoke we spent some time ‘hanging out’ with our pal Brian Johnson.

Philosopher extraordinaire and the mastermind behind Optimize —an online portal that delivers more wisdom in less time— Brian is inspiration on steroids.

If you’re as lazy as I am, you’ll love Brian’s minimalist approach to getting better at life.

In his Hero Training 101 seminar —which is based on Joseph Campbell’s well known book The Hero’s Journey and features the fascinating documentary Finding Joe— Brian emphasizes the importance of getting really comfortable with being uncomfortable.

Agreeing to ‘house sit’ a permaculture farm was the start of our ‘getting comfortable with being uncomfortable’ journey and the ride has just been getting progressively bumpier and more fun as we go.

Ed: This is the third post in our Hero Training 101 series. These are the others:

Notes From a Small Town (With an Epiphany)

It’s been two months since we untethered ourselves from city life (and all its creature comforts) and set off on our mission to get comfortable with being uncomfortable.

Although truth be told, at the time we didn’t realize that was our mission.

If we had, we’d most likely still be in the Mother City quaffing wine on Café Neo’s deck and marveling at the spectacular view.

Instead, we find ourselves in a small town in the Karoo because I answered an ad on Gumtree. Weird how that happens sometimes, right?

One minute you’re just mulling over an idea and the next thing you know you’ve agreed to ‘house sit’ a permaculture farm.

When we first arrived in Oudtshoorn a month ago we were all big-eyed at everything the town had to offer. Having just spent the previous three and a half weeks living off the grid on a permaculture farm outside De Rust, it’s safe to say the bar was set pretty low (read: floor height).

It’s all relative. On Wednesday we went to George and behaved as if we’d just arrived in New York for the first time. It’s no buzzing metropolis, but it has a mall and movies and the local Pick ‘n Pay stocks vegan cheese. ‘Nuff said.

Shout out to the forward thinking manager of that store. Whoever you are for president.

In Which an Epiphany Was Had

I’m not going to lie, we’re missing Cape Town. A lot. I knew I would, but then I’ve always embraced my inner city girl. Poor Sporty, on the hand, had a rather unfortunate epiphany during our time on the farm.

She’d always imagined herself living out her days on one of those co-owned hippie off the grid places where everyone has their own house but you all work together tending the veggies and selling eggs on the side of the road. (I’m not sure where she saw me in this fantasy.)

Anyway, we were about a week into our farm sitting gig when she approached me with a rather crestfallen look. I immediately assumed she’d accidentally stepped on a spinach bush, but the truth was in fact much worse. (For her, anyway.)

“I’m a city girl at heart,” she said sadly, while at the same time gazing distastefully at her grubby fingernails. (Sporty was in charge of keeping the garden alive, while my responsibilities included cooking, cleaning the pool and cycling into town to fetch wine.)

The Benefits of Unsettling Yourself

That’s the thing, though. If we’d just continued living our old life, she’d never have discovered that farming wasn’t for her. Purposefully unsettling oneself is scary in the extreme, but it’s also remarkably satisfying.

It allows you to test your mettle in situations you wouldn’t ordinarily find yourself. It teaches you patience, acceptance and tolerance and it shines a spotlight on your character. Which, it must be said, can sometimes be a little more revealing than one would like.

Also, it’s a wonderful opportunity to keep one’s sense of humour shipshape. The ability to find the funny when things get tough is of paramount importance when you’re spending most of your time outside of your comfort zone.

As much as we’re both longing for the Big Smoke, there’s much to appreciate about the ostrich capital of the world. For one thing, it’s not nearly as noisy. People almost never hoot here and that includes the minibus taxis.

Everyone greets you, whether they pass you by on foot or in a vehicle, they’ll say hi, wave, nod or something in between. Interestingly, we get stared at less here than we do in Cape Town. Even Sporty’s minimalist shoes don’t warrant a second glance.

We’ve heard a couple of stories of petty crime incidents, but overall the town feels really safe. The teenagers look like thugs but then greet you politely as they walk by. It’s a little disconcerting until you get used to it, then it’s just sweet.

Oudtshoorn has more churches, funeral parlours and graveyards than you’d think necessary for a town this size, but maybe there’s something we don’t know [insert soundtrack from The Shining].

We’re a month in and it’s safe to say we’re both really happy I responded to that Gumtree ad. We’ve made new friends, we’re more sociable than we’ve been in a long time and we’re even trail running again.

We’re also doing a fusion butt-kicking class twice a week that invariably leaves us hobbling around like a couple of old ladies. Randomly, the instructor is from Ohio in the US. Strange but true, doo da loo da loo doo.

We still sometimes feel like we’ve landed on another planet, but for the most part life is good. I mean, how often do you get to see a baby porcupine scampering into a cemetery at five in the morning?

[Tweet “”All strange and terrible events are welcome, but comforts we despise.” —Cleopatra”]

How stressed are you about what’s happening right now? Are you freaking out? Are you mildly anxious? Or, are you relatively calm? I’m willing to bet that your state of mind is directly related to how much news you consume.  When television first arrived on South African shores in the mid-seventies, the news graced our…

If aging gracefully is on your to-do list, then healthy aging is where you need to focus. It’s an all-encompassing endeavour that includes mind, body and spirit. Getting older can be tricky. By the time you notice what’s happened, it’s often too late to course correct. You’re creaky, you’re cranky, and your gray hair is…

Serving as a much-needed antidote to Black Friday, Giving Tuesday traditionally falls on the Tuesday following Thanksgiving. However, with the current state of affairs, we can’t wait until the end of the year for people to open their hearts and wallets.  Enter: Giving Tuesday Now. Launched at the beginning of May, the event aims to create… 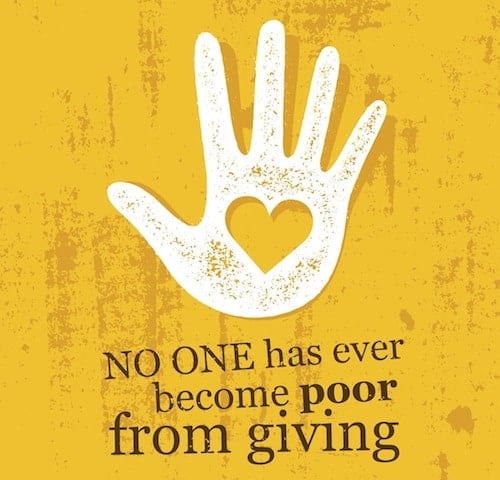 Be honest, how many times have you thought about making a difference and then done nothing because you felt overwhelmed by the enormity of the world’s problems? You’re not alone, most of us allow ourselves to be scared into inaction instead of just doing what we can. It’s not a good enough excuse though. As Robert…

I guess I should preface this post with a disclaimer. Sporty and I aren’t looking to date. We haven’t suddenly discovered the joys of polygamy, swinging, or any other extracurricular activities. ‘Extracurricular’ in lesbian circles generally means starting a book club or owning mini cows. Hobby farms aside, we have no intention of messing with…

Have you noticed how great you feel after you’ve done something nice for someone else? Well, it turns out there’s a perfectly good explanation for it. In his book, Why Kindness is Good For You, Dr. David Hamilton reveals how kindness has been scientifically proven to change the brain and impact the heart and immune…