News Information Overload (or, Why You Should Quit the News)

Television arrived in the country in 1976 and in our house a few years after that.

We had the news at eight in either English or Afrikaans depending what day of the week it was.

With only one channel we had no choice but to take turns.

Later, when our broadcast hours were extended, they introduced a short news bulletin at six in the evening.

Those were heady times.

Fast-forward to 2017 and things are a little different. Nowadays we have a barrage of information coming at us from all manner of sources, most of it not relevant to us.

Last weekend I went up to Johannesburg for a family reunion. My cousin picked me up from the airport and we spent the ride back to his house catching up.

“I’m just so depressed about the state of our country,” he admitted to me.

I get that it’s not all roses and sunshine here right now, but overall I feel pretty optimistic with where we’re headed as a nation.

“Do you listen to the news a lot?” I asked him.

“You’ll definitely feel happier if you do.” I told him.

Sporty and I quit the news years ago. While we weren’t what you’d call avid followers, we did make a half-hearted attempt at staying abreast of things. We never really questioned our motives, it was just something we did.

Becoming minimalist forced us to kick the habit. No television ergo no news to watch. After a while we made the connection between how we were feeling (much happier) and the fact that the news was no longer a constant in our living room.

A few years later I decided that a stint in government would make for good resumé fodder. Part of my job entailed attending morning news briefings (you know, to stay abreast of things). The meetings were relatively short and fairly relaxed, so I didn’t mind them too much.

It was only after I resigned that I realised what a negative effect they’d had on me. I felt noticeably lighter and happier and all because I was no longer privy to the news.

People always argue that they need to know what’s going on, but there are a few things to take into account when considering this.

Most of the time knowing what’s going on doesn’t serve us in the slightest. In fact, it more often than not the news has a negative effect on our wellbeing.

If it’s important, you’ll find out regardless or whether or not you spend your days glued to the TV. In his Complaint Free Living course*, Will Bowen tells a story of how news of Michael Jackson’s death reached him while he was in a remote village somewhere in Africa.

*You can find out more about Will and his CFL course at the end of the post.

Finally —and for me, this is perhaps the most important point— news is only worth knowing (and spreading) if you can actually make a difference. For example, if there’s a fire in your city and a lot of people lose their homes you can volunteer your time or donate food and clothes.

However, let’s say a plane goes down on the other end of the globe, knowing that doesn’t serve you in the slightest. And it definitely doesn’t bear repeating to everyone you run into. In those instances the best thing you can do is send out your prayers and thoughts to the people involved and leave it at that.

News channels are notorious for replaying the same video clips and sound bytes ad nauseam (or until something else happens and then they’ll do the same thing again). It’s rubber-necking plain and simple, but somehow the fact that it’s on the news makes it okay to gawp.

Bad news is bad for our mental health, affects our productivity levels and pretty much makes us miserable. 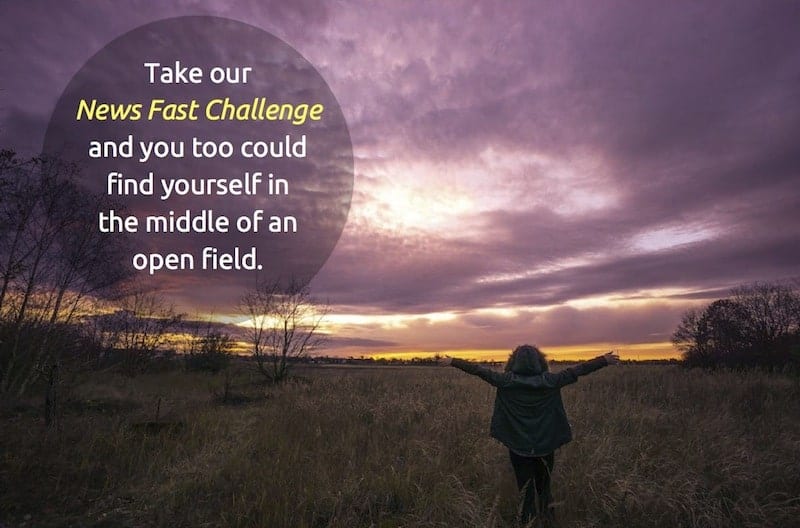 Do a Google search on why bad news is bad for you and you’ll be rewarded* with an avalanche of results. But proof is in the pudding. Don’t take my word for it or anyone else’s for that matter.

Instead, why not put our claims to the test by either quitting your news habit entirely or severely limiting your intake of it. I guarantee you’ll notice the positive effects within a week, if not sooner. If you want to simplify your life, this is a great way to start.

A few years ago Sporty and I signed up for Will Bowen’s Complaint Free Living course. While we’re by no means complaint-free, the course definitely helped us notice just how much we complain, blame and gossip.

Check out his book A Complaint Free World: How to Stop Complaining and Start Enjoying the Life You Always Wanted and order a no complaining bracelet from his website. Once you become aware of your negative patterns and behaviours, it’s a lot easier to redirect them in a more positive direction.

Let us know in the comments if you decide to take up the news fast challenge! Here’s to going from information overload to information zero load (and protecting ourselves from negative energy in the process)!

This post probably contains affiliate links. If you make a purchase via one of those links, we will receive a small commission at no extra cost to you. Read more here.

The Power of Play: Why Humans Need More Fun (and Less Screen Time)