Is Downsizing Photographs Even an Option?

To clarify, I’m not talking about 3000+ happy snaps you took while on holiday in Thailand. Because let’s face it, at least 2997 of those are of your feet with the sea in the distance, the many cocktails you quaffed, and of course, every meal you ate while there (even the shit ones).

For those kinds of photographs I have a simple solution. Choose one where you’re near a well-known landmark (to prove you were actually there) and delete the rest. Your hard drive will thank you for it. (As will your friends if you’re that person who hauls out your laptop or phone after dinner.)

But What About Old Family Photographs

I have a pile of family photographs I’ve been holding onto ever since I moved my parents into an old age home a few years ago. If I look at them once a year it’s a lot, so I’m starting the question my reasons for hanging onto them. The folks have both since shuffled off, so I guess that’s part of the quandary for me.

Originally the pile was quite a bit bigger, but I gave a lot to my cousins and aunts. Now I’m left with this smallish pile and I’m not sure what to do. You see the reason I never look at them is because it makes me sad. Or at least, it did until yesterday when something rather interesting happened.

My Dad’s cousin called a couple of weeks ago to say hi. We speak maybe two or three times a year. We weren’t close when my folks were still alive, but now they’re gone I think it’s nice for both of us, a way to keep family memories alive.

While we were chatting it occurred to me that Aunty Lena would likely get a lot more value out of these of photographs than I am. Especially as most of them were taken when my parents were much younger, long before my brother and I were even a consideration.

To me they’re simply pictures of two people before I knew them. It’s obviously novel to see my parents in such a happy and carefree light, but for Aunty Lena they’d be a lot more tangible than that. She might even recall the exact moment one of the photographs was taken. And even if she doesn’t, they’ll still have context.

I offered to send her some more of them and I could immediately hear in her voice how much the gesture pleased her. She’s in her eighties now, so I’m guessing she’s reflecting on the past a little more than I am.

Yesterday I finally hauled the photographs out and started sorting them into piles (yes, I’ve been procrastinating). Okay, so remember I said something interesting happened while going through them? Well this time, instead of feeling sad, I felt happy. It was genuinely a pleasant experience.

I realized then that I’d given so much energy and focus to the bad times we’d shared that I’d completely blocked out the good times. And if the pictures are anything to go by, our family had loads of them.

As I sorted the photographs into piles: one for Dad, one for Mom and one of us as a family, I decided that if I’m sharing with Aunty Lena then I should also share with my Mom’s sister. Aunty Margaret is also in her eighties and though she’s more practical than reflective I have no doubt she’ll appreciate them just as much.

I’ve been struggling with the idea of letting go for a few years now and initially yesterday’s happy trip down memory lane only served to compound that. But the more I mull it over, the more I’ve come to realize that all I needed was the reminder that we were happy. Maybe not all of the time, but so what? I mean even the Brady Bunch had their challenges, right?

I don’t need old photographs to remind me of what was. What was is exactly that, it’s in the past. I’m here now and ultimately that’s all that really matters. The old memories are wonderful and I’ll always have them in my heart, but it’s time to make some new ones.

So today I’m packing up the bulk of the pics and tomorrow and I’ll send them off to my aunts. It feels good knowing that they’ll soon be enjoying their own trips down memory lane. 😉 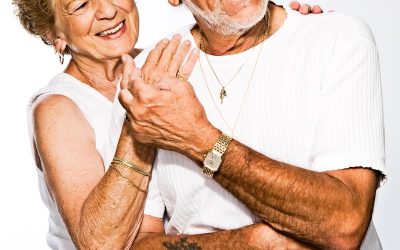 The Key to Aging Gracefully is Healthy Aging: 6 Tips to Make That Happen