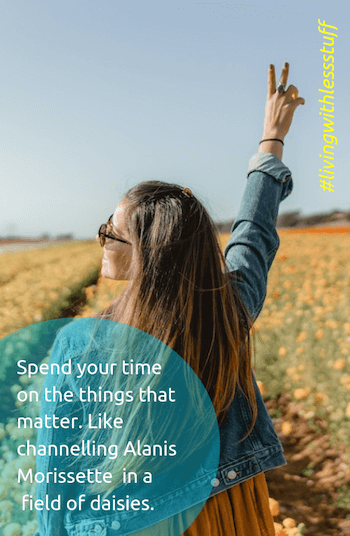 One person might see it as owning only what you can fit in your carry-on luggage. For someone else, it could be paring down for life in a converted shipping container.

People actually live in those things. Who knew.

It doesn’t have to be that extreme though. There’s no rule that says you have to move into an off-the-grid yurt just because you downsized.

I mean, if that’s your thing, fine. But it’s not a prerequisite.

For Sporty and I, living with less stuff is about striking a balance between comfort and complicated.

Because let’s face it, stuff —however nice it might be, whatever conveniences it may offer— complicates matters.

It comes with admin. You have to insure it, clean it and maintain it. Sometimes you’ll manage that yourself, other times you’ll need to call in an expert. Either way, it takes time.

Which is why we’re all about finding that balance. Too little stuff and life becomes uncomfortable. What’s the point, right?

On the other hand, too much stuff will eat into your spare time and you definitely don’t want that. Especially if the stuff in question is more nice to have than necessity.

(We’re all about staying sane is a busy world.)

The (Many) Benefits of Living with Less Stuff

We’ve experienced a ton (no exaggeration) of benefits since we first downsized in 2008. Initially, we ditched the majority of our worldly belongings because moving house was such a mission.

I’m exhausted just thinking about it. All that packing and unpacking. Ugh.

We love how easy our moves are nowadays, but that’s just icing on the vegan carrot cake. For us, the real benefit of living with less is the freedom it affords us.

Before, we were living paycheck to paycheck, working at jobs that didn’t inspire us. Weekends were split between taking care of our stuff, anesthetizing ourselves with red wine and lolling about on the couch watching one series after another.

In 2017 we decided to explore a new way of living. Untethering ourselves from our fixed abode, we embarked on a six-month adventure that saw us house-sitting a permaculture farm, embracing small town life, pet-sitting, picking almonds (for a day) and moving in with a boy and his dog.

Some of these opportunities occurred by chance, others were of our own design. All of them were made possible by living with less stuff.

It wasn’t all sunshine and alfalfa sprouts. Far from it, in fact. If we’d known what to expect beforehand, we’d likely have stayed home.

Without knowing it, we opted to follow Paulo Coelho’s advice and take the risk. He’s right, by the way, nothing can substitute experience.

Toward the end of our untethered adventure Sporty received an interesting job offer. A European airline was in need of German speaking agents for its Cape Town-based call centre.

Most people are looking to escape the cubicle, for Sporty it was a dream come true. After swearing off the film industry for good, the opportunity to work in a low-pressure environment was too good to pass up on.

She lasted three months before throwing in that towel. In retrospect, it was obviously not something she was cut out for. But the experience helped her realise how much she actually enjoyed her career in the film industry.

An ex-colleague of mine harboured aspirations of going to university. At the beginning of last year she made that dream a reality. The key to balancing student life with her part time job? Living with less.

Getting a degree is a dream for a lot of people. Limited resources are usually the main sticking point. Where will you find the time and money to study further? Especially when you’re already entrenched in adulthood and the responsibilities that come with that.

Living with less is the first step on your new career path. Clearing away the extraneous creates room for flow in your life. Ideas and opportunities will crop up when you least expect them.

Let’s say you’re a nurse, for example. You might think your options are limited, but what if you could get your RN to BSN online? With a degree under your belt, the sky’s the limit.

Even if you’re happy where you are, expanding your knowledge base can only stand you in good stead. Learning keeps the brain sharp for one thing. And who knows what offers you’ll be able to accept in the future because of it.

Living with less stuff reduced our stress levels, plumped up our bank accounts and gave us more time. Suddenly, we had no reason to numb ourselves with series and alcohol.

You might find you let go of your cupcake addiction or your pack-a-day habit. Stranger things have happened.

When your brain’s no longer in a stupor, you’re able to think clearly. Funny, that.

Learning and growing became our m.o. We began actively seeking out ways to hone our skills. Sporty did an intensive course in cryptocurrency purely because she loves numbers and spreadsheets.

I embraced my inner-chef, trying my hand at everything from sourdough rye bread to apple crumble and more.

We both made a point of optimizing our lives. This deep dive into personal growth allowed us to improve our productivity levels, become masters of equanimity and increase our happiness. Hero Training isn’t for sissies, but the rewards far outweigh the effort.

When you’re wide awake and in control, life doesn’t just happen to you. Rather, it becomes a beautifully choreographed dance.

There’ll still be some stepping on toes, but if it happens you’ll just laugh it off. You’ll stop arguing with reality (thanks for that nugget Byron Katie) and simply immerse yourself in the moment.

Happiness can be a constant, regardless of what’s going on around you. Your response to a situation will determine your emotional state. You can wail and gnash your teeth or you can accept it.

Only one of those will make you feel better about what happened.

“When we are no longer able to change a situation, we are challenged to change ourselves.” —Viktor E. Frankl, Man’s Search for Meaning

I used to wail and gnash my teeth (and then drown my sorrows in tequila) when things didn’t go my way. Living with less provided the space for me to explore new ways of being.

I can honestly say, I’m much happier now. So is Sporty.

One last thing (for now, anyway), living with less also resulted in a clean bill of health at the dentist. There are so many benefits to living with less stuff, who would have thought that would be one of them?

Scars are a great place to store your memories. It’s cheaper than renting a self-storage unit and less messy than cluttering up your garage with a bunch of sentimental stuff. Sure, the stuff may remind you of a person or a bygone era, but if it really meant that much to you, you’d let it… 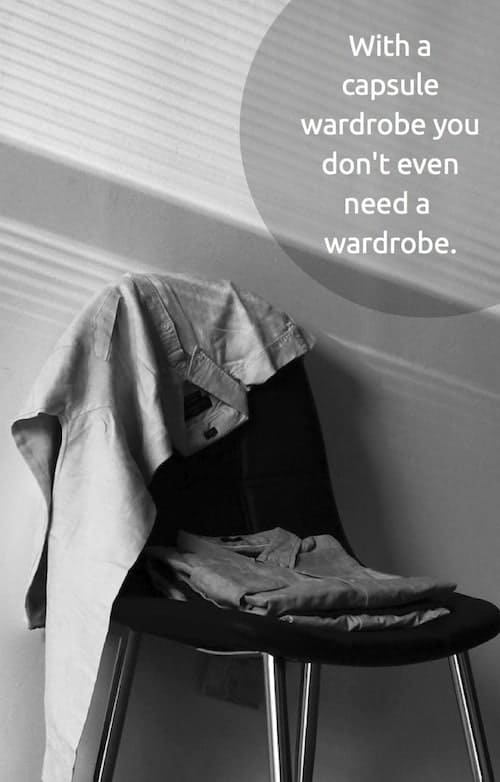 There are many benefits (and a couple of downsides) to a capsule wardrobe. All of which I explain further down, but first a little back story. When Sporty and I sold all our stuff in 2008 we didn’t realise there was a name for what we’d done. We just thought we were being really smart….

Pre-minimalism, Sporty and I used the head in the sand approach to our finances. Which is to say, we pretended there wasn’t a problem. This is fine in relation to, say, your coffee habit, but not so much when it comes to your hard earned bucks. I get it though. The challenge of sorting out…

Looks don’t matter nearly as much as function when you’re trail running. However, if you’re on the hunt for minimalist shoes for everyday use, you want them to look at least moderately stylish. Plus, it’d be nice if you could buy them from eco-conscious brands who care about more than just turning a profit. Looks…

According to Rich Roll, you shouldn’t hack your life. I agree. But…there’s no reason you can’t take a minimalist approach to personal growth. Book summaries are a great example of this. With so many great books out there, it’s impossible to read even a fraction of them. Between work, family and self-care, there’s hardly time…