A Minimalist Approach to the Cape Town Marathon: Training Update #1

Which is why Sporty and I have taken the minimalist approach and entered the 10km Peace Run instead.

It’s shorter, it’s got a cooler name and most importantly, it’s within our current fitness capabilities. We actually entered the full marathon last year, but didn’t make it anywhere near the start line.

The event takes place in September, which means training through winter. Sporty and I thought we were up for the challenge, but clearly sleeping in was more important.

This year we’re circumnavigating our shortcomings by entering the shorter trail run. A smart move, I’m sure you’ll agree. If we keep our training going through summer, maybe running in the dark won’t be as big of an ask next year.

A Little Background on the Cape Town Marathon

The Cape Town Marathon is an exhilarating festival of running that brings together runners, elite athletes, social joggers and surrounding communities to enjoy a Spring weekend of running through the Mother City.

Quick FYI if you’re not from around here. September is spring in theory (i.e. wishful thinking) only. It usually only shows up around the end of October.

As Africa’s ‘must run’ iconic city marathon, the SCTM aims to facilitate and leverage change at a national level through its Run4Change Legacy Programme. Of its five pillars, the one that makes our hippie hearts sing loudest is sustainability.

The amount of trash generated by most sports events is horrifying. From the packed-to-the-brim-with-junk goodie bags to the plastic water sachets and beverage cups, it’s hard to feel good about participating in something that’s creating such a mess.

Knowing that the Sanlam Cape Town Marathon was voted Greenest Marathon in the world for 2017 means a lot. Clearly the organizers aren’t just paying lip service when they say they’re committed to run green.

If you like the idea of running alongside marathon greats like Elana Meyer or last year’s winners Asefa Negewo and Betelhem Moges, the Cape Town Marathon is a must.

Technically, you won’t be running alongside them so much as you will be gasping in awe at the fact that their marathon time is a tenth of yours. Still, there’s nothing wrong with having goals.

Training for the 10km Peace Run

The gang at Cape Town Marathon very kindly offered us a couple of sponsored entries in return for monthly updates on our training progress.

It’ll be the same as when we did the Cape Town Cycle Tour a few years ago, except we paid them for the privilege of suffering up Wynberg Hill.

If they see this perhaps they’ll sponsor some entries for the 2019 race (with a couple of foldys thrown in).

Along with holding up our end of the deal, these monthly posts will help keep us accountable and give you guys something to laugh about.

Or maybe we’ll pull one out the hat and run the race in a ridiculously short amount of time. In which case you’ll be staring at us in flabbergasted awe. You never know.

To get us to the finish line we’ve fallen back on Shape Magazine’s 10km challenge. It’s what we used when we first started running, it’s what got us to our first half marathon and it’s what we return to whenever we hit a dip in fitness levels.

The magazine is no longer in circulation, but luckily for us Sporty had the foresight to save the programme on Google Drive. (Someone get that woman a Bells.) If you’re new to running or unfit it’s the bomb.

We were roughly two weeks into the programme when we received word that entries were open for the annual VWS Trail Challenge. Obviously we had to enter.

“We can just walk it,” I said enthusiastically.

“Or run/walk it,” replied Sporty with a grin.

Ever since we did that Full Body Reboot Sporty’s fitness levels having been increasing faster than I can say say “Hell yes!” to an offer of coffee and almond butter toast.

Sporty thanking the trail gods that we made it to the top of Kloof Corner without falling over.

Time: 2.08 (including water breaks, panting up stairs and enjoying the view)

Route: The race started and finished in Deer Park as usual, but that’s where the similarities ended. This year the sadistic folk at VWS had us head up the stairs at Kloof Corner to join the single track contour above Tafelberg Road.

They said it was for the view. Pfffft.

Enjoyment Factor (out of 10): Off the charts! In spite of our extremely tired legs.

Pro Tip: If you ever get the chance to enter the VWS Trail Challenge, go for it. You can choose between the 10km route for normal people and the longer 20km route if you’re a masochistic weirdo. 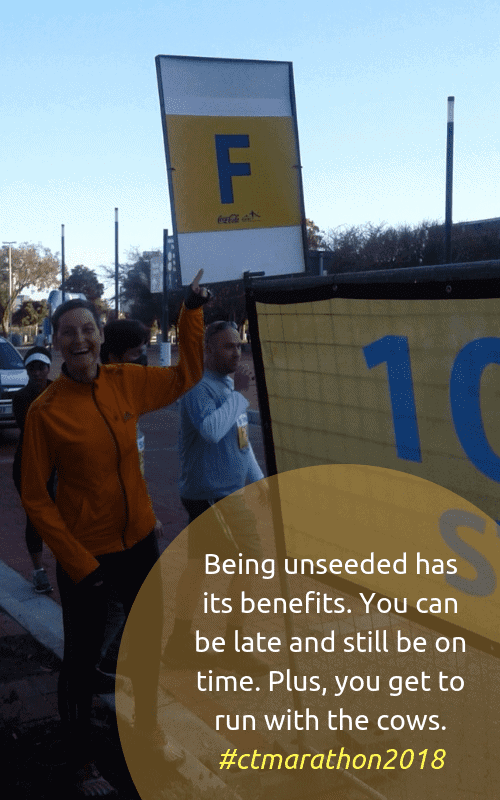