Spotlight On: 1500 Days to Freedom

Sporty and I thought it would be really interesting to shine a spotlight on other minimalists to see what their lives look like.

We came up with a set of 10 questions (the last of which we believe to be the most important) and we’re asking everyone we feature to answer them.

Same questions, different answers. It can only make for interesting reading.

Previous interviewees include Bill Powers, award-winning author of Twelve by Twelve and New Slow City, Claudia and Garett from Two Cup House and Anthony from Break the Twitch.

They all arrived at the idea of living a simpler life in different ways, but I think it’s safe to say that all of them are enjoying the many benefits of downsizing.

Spotlight On: 1500 Days to Freedom

In this edition of Spotlight On we introduce you to Mr 1500 from 1500 Days to Freedom. Mr 1500 lives in Colorado with his wife and two young children, where he spends his days developing software (no doubt with the skills he acquired studying biology and chemistry in college), hanging out with his family and recovering from the world’s most ambitious DIY project ever.

Mr 1500 has set himself the lofty goal of retiring at the far from ripe and not all that old age of 43. While becoming minimalist was never on his to-do list, downsizing to a much smaller home pretty much forced his hand. He’s fine with this, but evidently Mrs 1500 is struggling to let go. Although what she lacks in decluttering skills she more than makes up for with her kitchen prowess.

What Was Your Tipping Point?

What prompted you to say, “Screw it, let’s just sell everything!”?

My tipping point was discovering the Mr. Money Mustache blog. Before that, I was a saver, but I lived in a home that was ridiculously large. We sold it and bought one that is less than half the size and cost. We didn’t sell everything, but we drastically reduced our footprint. And we’re happier.

The people that lived in that neighborhood with that big fancy house were the most materialistic I’ve ever encountered. It was one big competition; fancy cars, noisy motorcycles  and expensive vacations. The tipping point was when a 5 year old girl expressed disgust that my daughter didn’t own an American Girl doll. We got out of there as fast as we could.

If there was something positive about the experience, we got all kinds of great stuff out of the trash. It amazed me that if someone didn’t want something, they just tossed it. Perfectly good items like tools and bicycles. If you must get rid of something, at least make an effort to pass it along to someone who can use it. In the United States, we can donate stuff to charity and get a tax deduction.

Wow Mr 1500 isn’t kidding, look at what people are just tossing in the trash!

How Do You Earn a Living Now?

Is it different than to your pre-minimalist days?

Nothing has changed. I’m still a computer programmer, but now I save even harder. I sock away more than 75% of my pay and it feels wonderful. In a couple months, I’m going down to part-time. After almost 20 years or working hard, I’m really looking forward to this new arrangement. I’ll work Tuesday through Thursday and have Friday through Monday off. It will be incredible to have more time to read, exercise, write, build silly things in the garage and explore my surroundings.

Ang: I started working a 3-day week a couple of months ago and Sporty is set to do the same at the end of November. Exciting times.

How Much Stuff Do You Own?

How much of it do you travel with?

We still own way too much. While my wife and I are on the same page with almost everything in life, she has hoarding tendencies. She’ll expand to fill whatever space we live in and has a hard time parting with stuff. Our current home is 1800 square feet while that big one we moved from was 4500. The big home was filled and she had a hard time parting with much of anything when we downsized. Forty months after the move, we’re still decluttering.

It is miserable. Time is so valuable. When you have to spend a couple hours every week just managing your stuff, it wears you down. You’re supposed to own your stuff, not the other way around.

Ang: Maybe you should get Mrs 1500 a copy of Joshua Becker’s book, Simplify? He claims it’ll help anyone declutter their home and Sporty and I agree. We’re card-carrying minimalists and it even taught us a thing or two about simplifying. #GoodRead

Is There Anything You Regret Getting Rid Of?

Not personally. However, I do regret one thing that my mother threw out. My deceased maternal grandparents had a friend who worked for the US space agency (NASA). About 30 years ago, they went to visit him and he gave them a bunch of neat space shuttle memorabilia (patches, stickers, mission data sheets) to pass along to the grandkids. My mom tossed it all in the trash.

I’m a space and science geek. While I don’t like collecting stuff, this would have been neat to show my own children.

What Are You Happiest About No Longer Owning?

I’m thrilled to be rid of that big home I mentioned in question 1. It had many rooms that just collected dust. It had a large lawn that cost close to $500/month to water in the summer (we were required to do this by the homeowners’ association). It just wasn’t us. By the way, don’t feel bad that we moved into that little ugly house. I’ve been working on it since we moved in and it now looks like this.

Talk about a make-over, that’s just incredible. You deserve a beer Mr 1500!

How Do You Handle Gift-Giving?

For each other, friends, family, etc.

This is a tough one. Some of our relatives feel that they must express love through physical gifts. We’ve been telling them for 5+ years to stop buyong us things and the message is finally starting to sink in. What I always say is this: “Instead of buying us stuff, put the money towards travel to come see us. We’d much rather have you in person than something from the store.”

Do you have? Did you ever have? How did you deal with it?

I graduated university with about $60,000 in student loan and credit card debt. It was horrible. I paid it down as fast as I could and never looked back.

The only debt I carry now is a mortgage. I could pay it off, but if someone is going to loan me money at a super low rate, I’ll take it. The cash sits on the sidelines now, but we may buy another property with it soon.

Sporty and I Eat a Plant-Based (Vegan) Diet.

Is this something you could see yourself doing? Tell us about the kind of food you enjoy.

But who am I to talk since I still eat flesh? I backed it down considerably though, through meat substitutes. I think cultured meat will be a great solution for those who can’t give up the real thing.

What Does the Term ‘Carbon Footprint’ Mean to You?

It’s the negative effect I have on our planet. And most humans are a net negative. However, I hope to live my life in such a way that the world is a better place because I have lived. To do this, I must do something to offset my consumption. I haven’t figured out exactly how I’ll do it yet, but it will probably involve leaving a significant portion of money to a worthy organization (I don’t believe in inherited wealth).

There is no reason I have to wait until I go to the dirt farm though. I have insulated my house far past what the local codes require. I ride my bicycle whenever possible. If I ever purchase another car, it will be electric and I’ll charge it with solar panels on my roof. Every bit helps.

I love peanut butter. That is an understatement. I’d KILL for it. Well, not really. I take it back; in some cases I just might! Mrs. 1500 made a spectacular peanut butter pie a couple weeks ago. We each had a piece after dinner. I then forgot about it. A little while later, I was rummaging through the freezer and discovered a quarter of the pie. Guess what I had for lunch that day? #NoSelfControl

Any half-awake materialist well knows – that which you hold holds you. —Tom Robbins 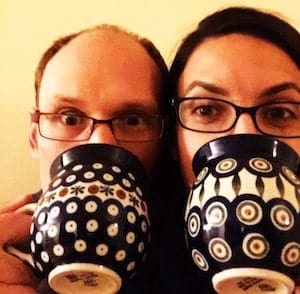