Why Vegans Don’t Eat Honey (And You Shouldn’t Either)

Have you ever wondered why vegans don’t eat honey?

A lot of people don’t understand why it’s such a big deal for us.

For a long time, Sporty and I didn’t get it either.

But then we discovered how many nectar-foraging trips it takes for a bee to produce half a teaspoon of honey.

Up until that point we’d never given it any thought. We liked the taste of honey so we bought it. End of story.

However, once we understood the effort involved, it was easy to cross honey off the shopping list for good.

It’s about more than the hard work required by our bee friends, though. There are numerous other reasons why vegans don’t eat honey.

The True Cost of Honey

Honey has long been a staple in our homes, both in the kitchen and in the medicine cabinet. There’s no denying its health benefits or the fact that it is super tasty.

Unfortunately, honey comes to us at a far greater cost than the amount written on the price tag.

For starters, bees are being exploited and even tortured for their wares. Add to that the fact that bee numbers are declining globally due to pesticides, habitat loss and climate change.

This report from the Center for Biological Diversity explains why that’s so problematic.

“As the world’s primary pollinators, bees are an essential component of functioning ecosystems. Without them, much of the planet’s flora —particularly cultivated crops— would not survive.”

These guys need our protection now more than ever. And not just for the sake of their wellbeing, but for ours, too. This article from Save On Energy outlines in sobering detail exactly what would happen if honeybees become extinct. 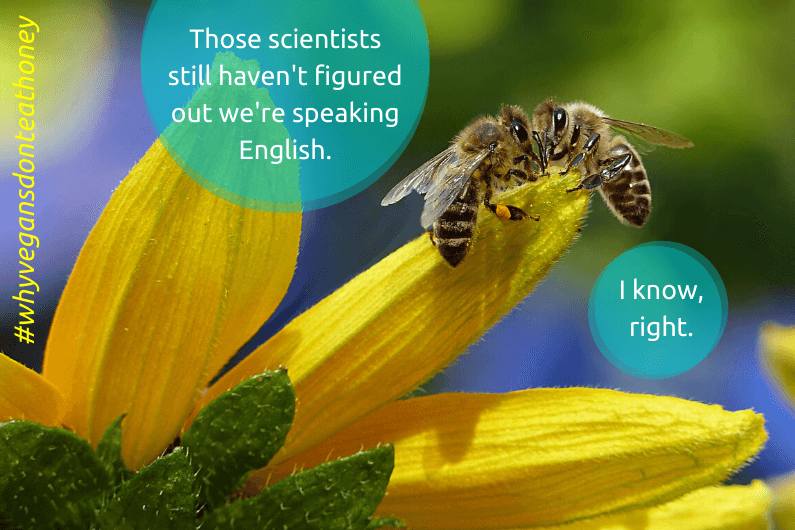 Bees are incredibly complex creatures with a unique language that scientists have long been working to decipher.

During World War II, Nobel-prize winning ethologist, Karl von Frisch, made a remarkable discovery that led him to understand how bees communicate the location of food sources to each other.

More recently, two researchers from Virginia Tech enjoyed a breakthrough when they decoded the language of honey bees.

According to the Science Daily article, this will allow other scientists to interpret the insects’ highly sophisticated and complex communications. Thus enabling them to figure out where and when to plant supplemental forage for our heroic pollinators.

Bees also capable of abstract thinking and enjoy similar memory triggers from smell to that of humans.

They’re also extremely community-oriented, with each member clear on its role within the hive. Bees are genius mathematicians too, as you’ll see in the video further down.

Bees Need to Keep Their Honey (and Everything Else They Produce)

The honey that bees produce provides vital nourishment for them, particularly during the cold winter months when nectar isn’t as freely available. Making honey is no easy task either. Consider that a worker bee can visit 10,000 flowers in a day and yet produce only a teaspoon of honey in an entire lifetime.

The royal jelly (or bee milk) produced by nurse bees goes to feeding the babies and is also used to grow the queen larvae into a queen bee. Bee venom is the latest fad in the beauty industry. It takes about a million bee stings to produce just one dry gram of bee venom.

These industrious creatures also secrete wax to build their hives and collect propolis from the buds of trees to use as cement and as an antiseptic. Everything they make has a purpose.

Why Factory-Farming Bees Is a Bad Idea

This TED-ed video explains why bees love hexagons and more importantly, why they would never voluntarily live in a square.

The well-known animal rights organization, PETA, claims that profiting from honey requires the manipulation and exploitation of the bees’ desire to live and protect their hive.

Factory-farmed honey bees are victims of unnatural living conditions, genetic manipulation and stressful transportation. Beekeepers force their hives to live in boxes to make it easy to transport them as well as to harvest the honey.

When a new queen is born, the hive will instinctively split. Since this causes a decline in honey production, beekeepers will often clip the new queen’s wings to prevent her from leaving.

Queens are artificially inseminated, either instrumentally or through the use of drones (who are then killed afterwards).

Large commercial operations sometimes take all the honey instead of leaving enough for the bees to get through the winter. The honey is then replaced with a cheap sugar substitute.

Most beekeepers remove all the spring-season honey and in colder areas, they’ll often burn the hives with the bees inside before the onset of winter.

If their colony becomes infected with deadly parasites, beekeepers opt to burn the entire hive with the bees still inside rather than go to the trouble of relocating them first.

These are just some of the many problems associated with the bee industry. If you want to delve a little deeper, PETA and Vegan Peace both have a wealth of information on the subject.

Is Ethically Sourced Honey Even a Thing? 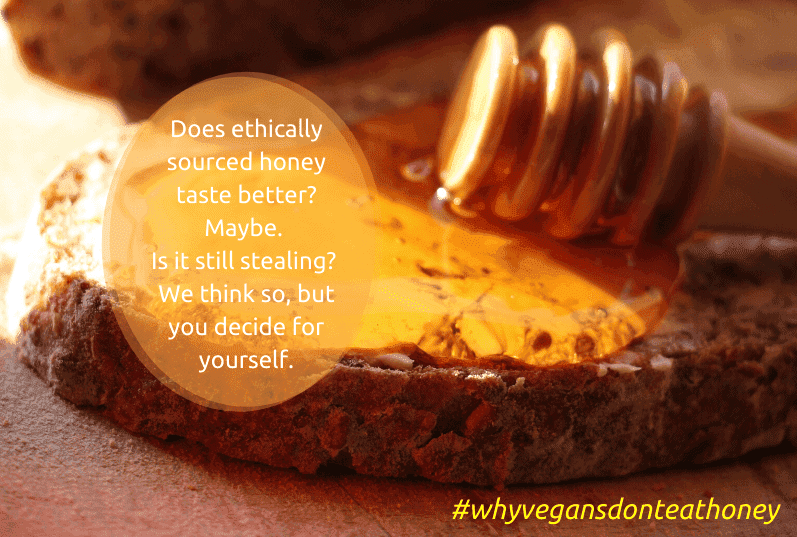 We don’t think so, but a lot of people believe there is such a thing as ethically sourced honey. No matter how you cut it, honey creates some sticky ethical questions.

Most vegans won’t eat it, but some think it’s okay. Friends of the Earth shared an ethical honey guide, while The Guardian posed this question in their Ethical Living section: Should vegans avoid eating honey?

As usual, both sides offer food for thought, but as far as we’re concerned, there are plenty of reasons to stop eating honey (and using all the other bee-related products).

When you consider the size difference between humans and bees, it’s not hard to grasp that our ‘wants’ are significantly greater than their needs.

After all, unlike bees, humans can thrive just fine without honey in their diets. It makes sense, therefore, to let the pollinating superstars keep the goodies they make.

The more we humans boycott the honey industry, the better life will be for the bees. In turn, this means a brighter future for the planet and for us.

“Bees are hard-working animals who deserve to keep the labour of their work.” —Vegan Peace

Cruelty-Free Alternatives to Honey (And Other Bee Products)

Fortunately, all is not lost. There are plenty of vegan alternatives to honey to satiate our desire for something sweet. A lot of sweeteners nowadays are quite processed. If you’re not all that keen on those, then try using dates in your cooking and baking.

In case you didn’t believe me, here’s a recipe for a vegan Snickers bar and just for good measure, here’s one for a Giant Twix. Both use dates to make the gooey, chewy delicious filling.

Beeswax is used in a wide variety of products, from lip balm and the coating of tablets to candles and cosmetics. Vegan alternatives to beeswax are available, it’s just a matter of looking for them. If you’re a surfer you’ll be happy to know that you can get cruelty-free surfboard wax.

Honey and propolis are both used as natural antibiotics, but there are plenty of others that work just as well. Next time you’re sick, try combating the infection with Echinacea or Neem instead.

I know Manuka honey is on that list of natural antibiotics, please don’t use it.

What do you think? Are you up for leaving honey off the menu?

Hopefully, this article has helped you understand why it’s important to give up honey. But, if you’re struggling with the idea then do it in stages.

As a first step, stop using it in your drinks when you go to Starbucks.

Experiment with other sweeteners on your toast and pancakes or when you’re baking. Very often we use (or do) things out of habit. This is a great opportunity to explore alternatives.

You can do it. We believe in you. 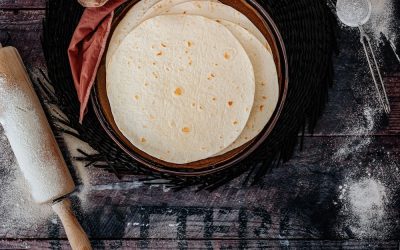